Most Vintage car owners keep up on oil changes but totally neglect their cars cooling system. Changing your oil and filter is great protection for your engine, but what about your car’s cooling system?

Antifreeze inhibitors eventually break down and the cooling system is then at the mercy of rust, scale, debris, and corrosion. There is, in older cars, an electrolysis taking place from dissimilar metals (steel, aluminum, copper, brass, and iron) picking up a slight electrical charge and being deposited in the radiator, heater core and engine parts. You can check for this by placing an ohm meter probe into the coolant with the car running at idle, you should pick up a slight reading. This charge is what leads to the electrolysis deposit, a build-up of a crusty white to gray substance. A thin layer of this will gradually build up, restricting flow and eventually clogging the radiator and heater.

To prevent this, it is imperative to drain and flush your entire cooling system at least once every three years depending on usage and mileage. A good ethylene glycol mix of 50/50 to 65/35 or a recommended factory fill of minus 30 – 35 degree F is best. In the early year vehicles, prior to anti-freeze, kerosene was used for freeze protection in winter months and water in summer.

Many antique and vintage automobiles had drain cocks in the engine block. These are very useful during any flush procedure, open them until all water runs clear. Also, do not neglect flushing the heater core gently with water. Remember to turn the heater on for a few minutes during summer driving so that the coolant in it does not become stagnant.

Never use only water as coolant, as it will eventually turn the entire system to pure rust. The anti-freeze with all its protective additives will prevent this from happening. The correct mixture of water to anti-freeze will also raise the boiling point and give freeze protection to your vehicle. Always store anti-freeze in a sealed container as it can be lethal to animals who may drink it because of its sweet taste.

Anytime there is air entering the cooling system (leaking radiator, hoses, clamps, headgasket etc.) it will accelerate the corrosion process. Oxygen creates acids which in turn causes the flaking and breaking down of all the metals of the car’s components. If a leak is detected it should be addressed and remedied immediately before conditions worsen.

For an example, we once had a 150 series van in our shop for an overheating problem. It had overheated severely and blew its head gasket, which we replaced along with new hoses, fan belts, thermostat and cleaning and rebuilding of the radiator. Once we completed the work, including flushing and new anti-freeze, it was still overheating. We decided to pull the water pump and low and behold there was only one blade left on the impeller. The rust completely eroded the other blades away. I have encountered many individuals who knowingly have a leak or overheating problem and totally ignore it. They keep adding coolant and say they will repair it but never do. The end result is a cracked head or head gasket replacement, which could have been easily prevented with maintenance. Sometimes when rust is severe enough it may take several flushes and coolant replacements over a scheduled period of time. The rust can become embedded in the pores of the cast iron block which is not completely removed the first time around.

Another example of neglect or just total ignorance was in 1973 a gentleman called and asked if he could tow his vehicle to our establishment as he had broken down due to excessive overheating. When the car arrived the underhood was smoldering and had a terrible burnt odor. I popped the hood and couldn’t believe what I saw. He had overheated so badly that the motor was seized and the ignition wires had melted on it. I asked him what had happened. He said he was on the interstate when the temperature gauge pinned and he did not want to stop. He said he drove 30 miles that way and figured he could continue on. After hearing about the cost to repair all of this, he sold the car to a scrap yard. So much for maintenance and common sense.

Living on the east coast with the heavily salted roads, corrosion may also be on the external surfaces of your radiator and coolers. It would be a good idea to routinely and gently pressure wash these parts with soap and water at a local car wash to reduce the accumulated road salt.

HOSES should be checked, heat, moisture, and flexing can make them crack and peel away internally. Some pieces may break away, circulate and cause a blockage elsewhere.

THERMOSTATS should be looked at during maintenance work. You can remove it and place in a pan of water to the correct opening temperature at 160 – 180 degrees depending on which one you have to see if it opens at that point. If it’s good, reuse it with a new gasket or you may just replace it entirely. Never operate your vehicle without a thermostat. It is a necessary component that places a restriction on coolant flow to give the radiator ample time to cool it down. Thermostats prior to 1970 were usually 180 degrees. All newer vehicles at 195 degrees which is actually better for them because it reduces condensation within the engine and improves fuel economy. In all vehicles running too cold can be detrimental as moisture will contaminate the oil and the vehicle will run sluggishly.

The RADIATOR CAPS rubber gasket and spring can crack or break and render it useless as the system will no longer be pressurized and spew coolant and cause overheating. Never remove a cap while the engine is hot, the boiling coolant can cause severe burns. Always wait until everything cools down.

The FAN BLADE should be looked at carefully for any cracks or loose rivets. A blade may come detached and destroy the radiator core. This could be very costly for an older vehicle. Some honeycomb radiators could cost a few thousand dollars to replicate and manufacture. It is a tedious procedure and could take hours upon hours to reproduce to its original form.

WATER PUMP – If there isn’t any visible leakage or noises it’s usually okay. You can place both hands on the fan blades and rock back and forth. If there is any play in the bearing, it’s best to replace it, rather than take a chance later on. Also, remember to check your engines timing. If not adjusted properly it could lead to overheating. A pumps purpose is to produce a constant circulation through a spinning impeller. Using centrifugal force circulates coolant through the engine block and heads so that the radiator can dissipate the build-up of heat. Many early pumps needed adjusting replacing with grease.

Overall, the radiator is the most important part of your vehicle. If you are still overheating uphill or at an idle, it’s definitely the radiator. A radiator shop will clean, repair, rod-out or replace the core if necessary. You can periodically check it for any visible leakage and gently brush any debris that collects in the fins.

Remember maintenance is the key part of any vehicle so that you are not disabled and sitting on the side of the highway overheating! 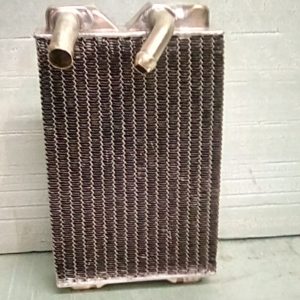 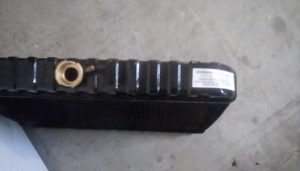 Constructing a new automotive radiator core for a vintage car is a work of art. 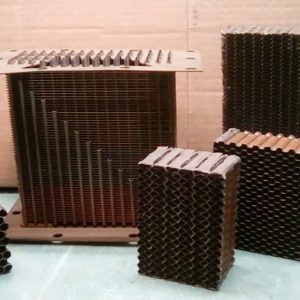 In the beginning, these craftsmen were true pioneers. They had nothing to work with but trial and error. They experimented with materials such as copper and brass to determine how internal combustion engines operated to prevent overheating and dissipation of heat transfer. 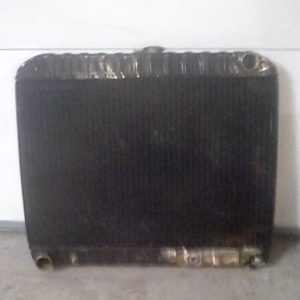 Two types were used such as honeycomb tubular cores with various types of tubes and fin configurations. Many honeycomb style radiators were tried early on. Patterns consisting of hexagon, square, diamond,  etc.  created a practically an endless array. 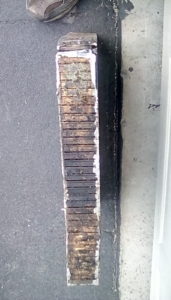 Honeycombs were either cartridge or film type construction. Cartridge cores are individual tubes cut to the depth necessary, then swedging the ends, placing them into a jib packed tightly and face dipped into ⅜” lead bath front and back. Cores were run off machines in lengths then placed in a jig and also face dipped. Once the core is constructed the upper and lower tank sections are soldered to complete the radiator.

Neglect is the most common cause of radiator failure in classic cars. Most enthusiasts do not perform regular maintenance for the cooling system, such as flushing the engine block and changing the coolant,  which should be done on a 2-year schedule. 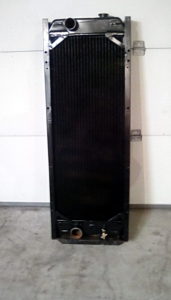 In my experience fan belts, hoses, clamps and water pumps should also be checked periodically and replaced as necessary. Never use STOP leak, it will completely swell and clog everything including your engine, radiator and heater core. 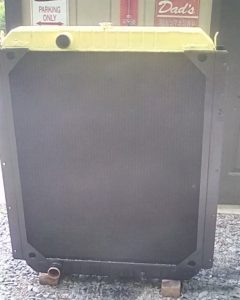 Maintenance will undoubtedly prevent a lot of future problems, such as clogged radiator leaks, blown head gaskets or ruining the entire engine.
Care and prevention are well worth it and better than being on the roadside waiting for a tow truck. 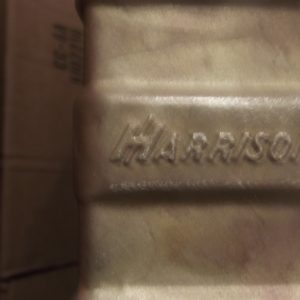 About 20 years ago a gentleman called and asked us to construct a special radiator for a 1910 Oldsmobile to be entered in the Great American Race, which is held yearly in the US from coast to coast. He insisted that he had to travel through the desert and needed optimal cooling. We completely disassembled the radiator, cut a facing off his original core for authenticity and
added a modern heavy duty copper-brass core with facing on the front side for originality. On a later date, he called and thanked me for our work. He traveled through the desert of 112 degrees without a hitch.  Proof that a radiator design and maintenance is key.